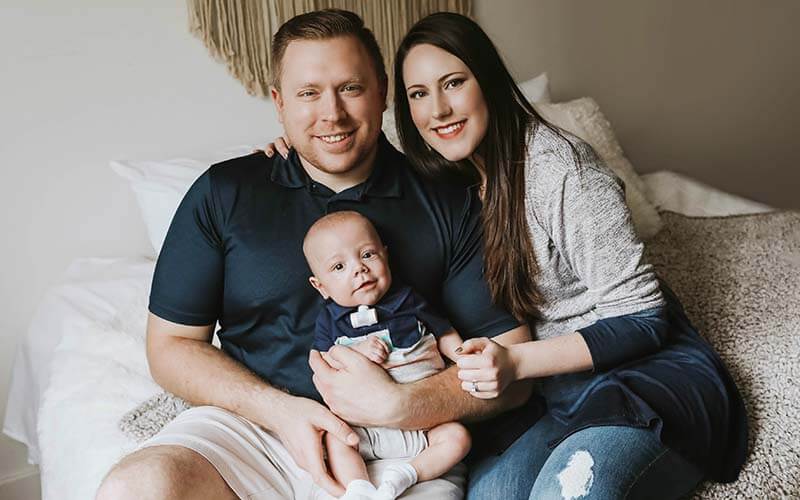 After five months in the NICU, Nolin was finally able to go home. As happy as his family was to bring him home, there was fear, too, of the three-hour drive across the state to get there. Nolin’s parents, Lindsi and Kyle, share the story of Nolin’s journey.

Our Nolin was born prematurely at 30 weeks via emergency C-section. He had to be intubated which caused damage to his airway. He was then air-lifted to Children’s Mercy where he received a trach and g-tube. The hospital told us that he would need 24/7 monitoring after he was discharged, and referred us to CHC.

When it was time to bring Nolin home, we had mixed emotions. Of course we were so happy to finally have our son at home with us, but we were also terrified at the thought of making the three-hour drive home alone. What if something went wrong?

The CHC Hospital to Home (H2H) program alleviated that fear. Our CHC nurse came to the hospital, met with Nolin’s nurse, and took notes on his care. Having her in the car with us on the way home in case there was an emergency was a major relief. Once we were home, she was able to set up Nolin’s equipment and routine to make the transition as smooth as possible. The goal was for Nolin to not even notice the difference—that consistency is so important. Knowing that she had all of the settings down and that we weren’t all on our own gave us such peace of mind!

For the first two weeks, we had 24/7 nursing care. In-home care definitely takes some getting used to—having people you just met in your house! You don’t have the same level of privacy. But everyone was so nice and bent over backwards to make sure we were comfortable. Also, knowing that we could leave the room and Nolin would be safe meant a lot.

Nolin has daytime nursing care while we are at work, and overnight nurses during the work week. Without nursing care, one of us would have to be awake at all times, and there’s no way both of us would be able to keep our jobs. We are so thankful programs like CHC’s exist, because we don’t know what we would have done without it. We are also so thankful to Nolin’s grandparents. At least one set of grandparents comes each day to help.

In many ways, Nolin’s day is the same as other babies his age. He has play time, eating time and tummy time. He looooves being held, watching Disney movies, dancing (we move his arms and legs around), kicking his feet, and shoving his whole hand in his mouth! At night we have dinner and hang out as a family. But there are differences, too. He is on an air machine most of the morning. His airway needs suctioning several times per hour. He is on a ventilator for eight hours per night. The main priority is to keep his airway open.

Still, Nolin is an active little guy, and he’s progressed so much since he’s been home! He can take bottles, hold his head up, and can almost sit up on his own. The consistency of CHC’s nurses really helps. Developmentally he’s right on track, but speaking and eating will be delayed due to the scar tissue that has covered his airway. When he is older he will be able to have reconstructive surgery to widen it. Once the airway is repaired, he will likely need therapy to learn how to swallow again, and to eat solid foods. His vocal chords may be affected. We’re going to start on learning sign language soon, which we are excited to do as a family.

Our wish for Nolin is that he will live a happy life filled with all the things kids dream of. We want him to be able to walk, talk and laugh. If it turns out later that he doesn’t need to use sign language to communicate, he’ll still have a valuable skill set! CHC is helping us give him the best shot at a great life.